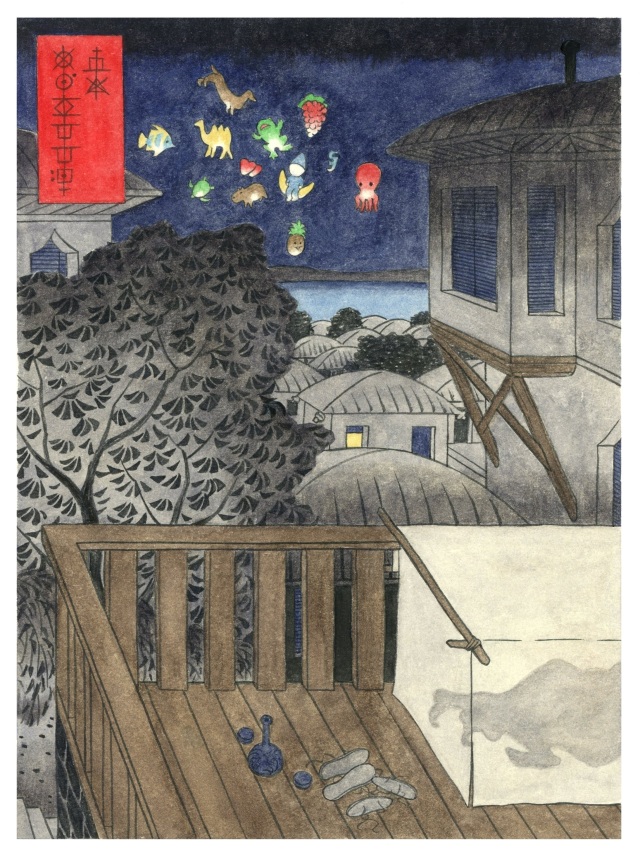 For centuries, it has been a tradition throughout the empire to mark the eve of Midsummer (considered to be the first new moon after the summer solstice) with a nighttime display of takarnalu. These are paper lanterns mounted around a source of heat, which causes them to fill with hot air and rise high into the sky. Originally, these takarnalu were small paper lanterns containing a lit candle, but as time went on, they became ever larger and more elaborate. They now tend to be around the size of hot air balloons, which indeed they essentially are, only that they are always unmanned and constructed out of a heavy but translucent paper material. In Sensuka, takarnalu are now fashioned in a limitless variety of fantastical shapes, and a big attraction of the summer displays is seeing what ingenious and amusing new designs the organizers have prepared for the occasion.

The takarnalu are tethered with very long ropes to barges in the middle of Sensuka Harbour, in such a way as to be visible from almost any location in the central neighbourhoods of the city. Given the pronounced slope of the terrain and the architectural style of the buildings, this print would appear to show a view of the lantern display from Labeosti Hill. The balcony in the foreground is furnished with a temporary structure known as a sakamo, a kind of small, airy linen tent which Sensukans will set up on their balcony or rooftop so as to have a cooler and better ventilated place to sleep on very hot summer nights. The empty cups, wine jar, and discarded sandals indicate that two people were watching the lantern display from the balcony. They have not waited until the end of the show, however, to retire into the tent.