This weekend, for the first time, I will have a booth at the Toronto Comic Arts Festival, which takes place Saturday and Sunday, May 12-13, at the Toronto Reference Library and other satellite venues downtown: http://www2.torontocomics.com/ I will be peddling my wares at table 256 in the Bram & Bluma Appel Salon on the second floor of the Reference Library. In addition to launching my first full printed edition of “The Love Song of J. Alfred Prufrock by T.S. Eliot” A Comics Adaptation,” I will also be selling a 22-page full-colour sample section of my ongoing graphic novel project, “Each in His Narrow Cell.” While the cover wording, it occurs to me now, may give the impression that this is some megalomaniacal fantasy about Julian Peters conquering Canada, it is actually a  dramatic retelling of the British conquest of the French colony of Canada in 1759, which happens to have been written and illustrated by Julian Peters. 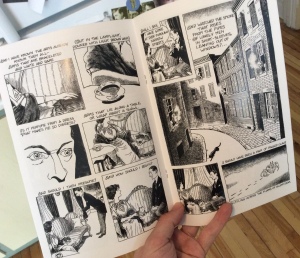 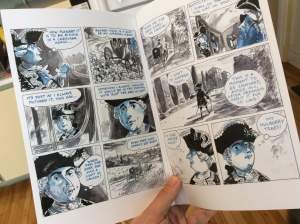