Translation of a Montreal song from 1709

Back in 2012, I created a comic based on the lyrics of a song written in 1709 by the Montreal painter, money forger, and jailbird Jean Berger (1681-?). Jean Berger was suspected of being involved in the beating of Saint-Olive, the town apothecary, and of providing the two accused assailants with clubs and disguises. Contrary to what is affirmed in this song, which Berger wrote to mock the judicial authorities for their handling of the case, the two assailants were eventually discovered and put in prison, while Berger was condemned to be pilloried in the town square for the very act of penning the defamatory ditty. However, Berger managed to break out of his jail cell before the sentence could be carried out, and he escaped to the English colonies to the south. As for the two assailants, they also made their escape from the town’s evidently very porous prison, and slipped town in a peasant’s cart while disguised as women.

The comic appeared in a show of art inspired by Berger that was held at Concordia University’s FOFA Gallery. It is being republished today in the newsletter of Winning Writers, an online resource for poets and writers, along with my English translation of the poem, which appears below. This translation was made very quickly, and there are a few archaic French words whose meaning I had to take a guess at, but it should at least elucidate the meaning of my illustration for English readers.

Gather round, young and old,
People of Ville-Marie [Montreal],
We shall now recite
This pretty song
Which we have written in this tone
The better to entertain you.

On St. Matthias’ Day,
The unfortunate Saint-Olive,
While passing in front of the hospital, ran into
Two unknown ruffians
Each of whom, with his club,
Set him dancing very much in spite of himself.

At each blow he received
This monstrous fellow
Cried out, “Messieurs, spare me
For it is very cold
And I beg your pardon,
Messieurs, have mercy on me.”

After he had been well clubbed,
They left him on the ground
And with great difficulty he made it
Back home, in a great fury,
Crying out in a pitiable tone,
“They’ve smashed my back to bits.”

He immediately sent out
For the justices of the peace,
Giving out money by the fistful
To ensure they be punished.
These gentlemen declared without ado:
“In prison they will go!”

The next day, bright and early,
Witnessed the foolish actions
Of the judicial officers, pen in hand,
Making applications,
Issuing summons
To people who were in their beds.

Right away all of the summoned
make their way to the hearing.
There they are interrogated
On their good conscience:
“We were all in our homes
While that weakling was being beaten.”

Those who will have profited the most
From this pleasant affair,
The honourable judges and clerks,
The judicial officers and the notaries,
Will all go drinking at Lafont’s,
And have a good laugh at his [Saint-Olive’s] expense.

As for you, my poor Dauphinois [Saint-Olive was from Dauphiné in France],
How I pity your sorry state,
To have allowed yourself to be clubbed
Without discovering the culprits.
It will cost you a great deal of coin,
Not to mention all the pain you may be suffering.

As for myself, I declare and conclude
That, if you want my opinion,
Having not contented himself with being beaten,
He should pay the fine
For making false accusations,
All of which will teach him not to lie. 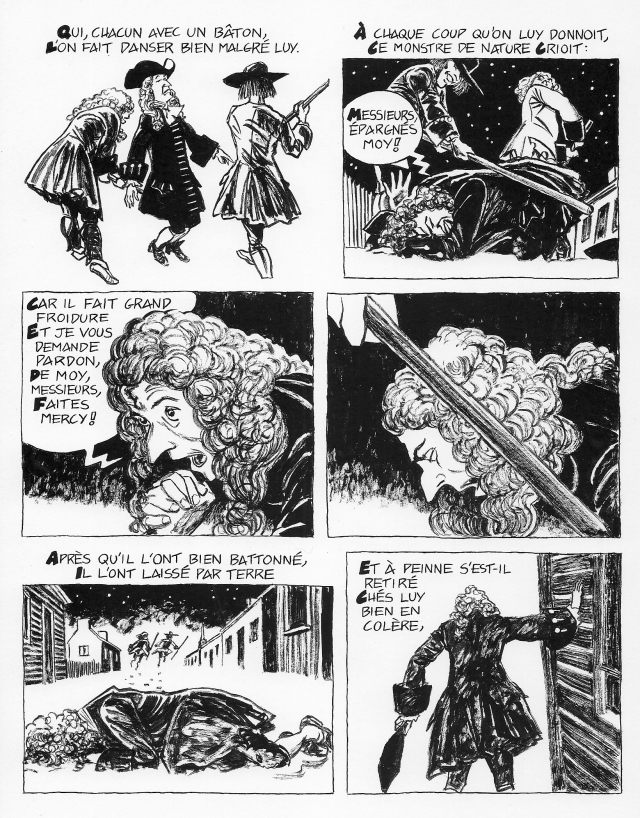 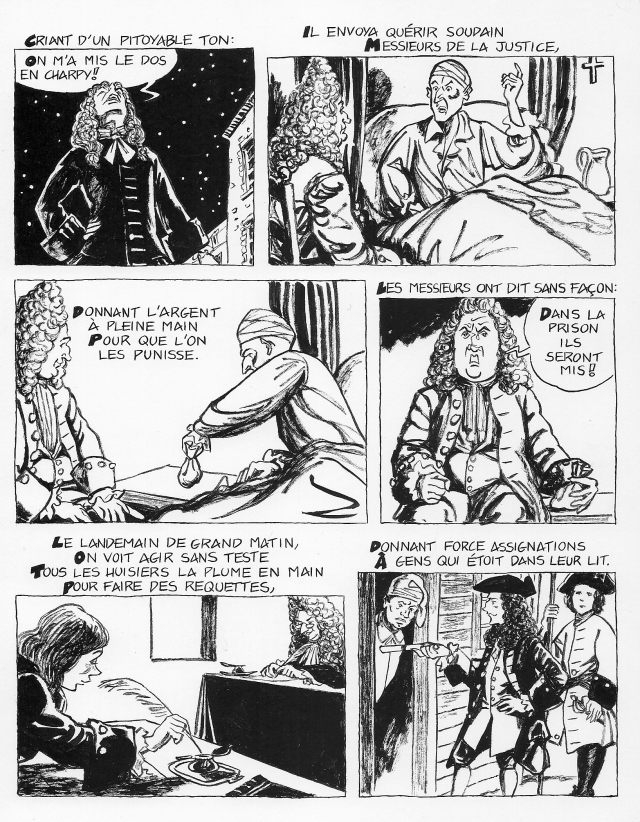 1 Response to Translation of a Montreal song from 1709