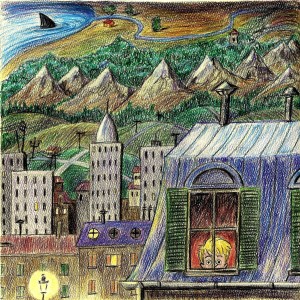 The Colomber is a short story by the Italian writer Dino Buzzati. It tells the story of Stefano Roi, a sea captain’s son who is pursued since childhood by a fearsome sea monster known as the colomber. To ensure his safety, his parents send him to study in a big city located far inland. Eventually, of course, the “lure of the abyss” proves too strong, and Stefano returns to the sea to confront his fate. This drawing illustrates the following passage, translated into English  by Lawrence Venturi:

“So the idea of that hostile creature waiting for him day and night became a secret obsession for Stefano.  And even in the distant city it cropped up to wake him with worry in the middle of the night.  He was safe, of course; hundreds of kilometers separated him from the colomber.  And yet he knew that beyond the mountains, beyond the forests and the plains, the shark was waiting for him.  He might have moved even to the most remote continent, and still the colomber would have appeared in the mirror of the nearest sea, with the inexorable obstinacy of a fatal instrument. ”   -Dino Buzzati, The Colomber

Like Loading...
This entry was posted in dino buzzati, illustration and tagged il colombre, lawrence venturi, le K, the colomber. Bookmark the permalink.