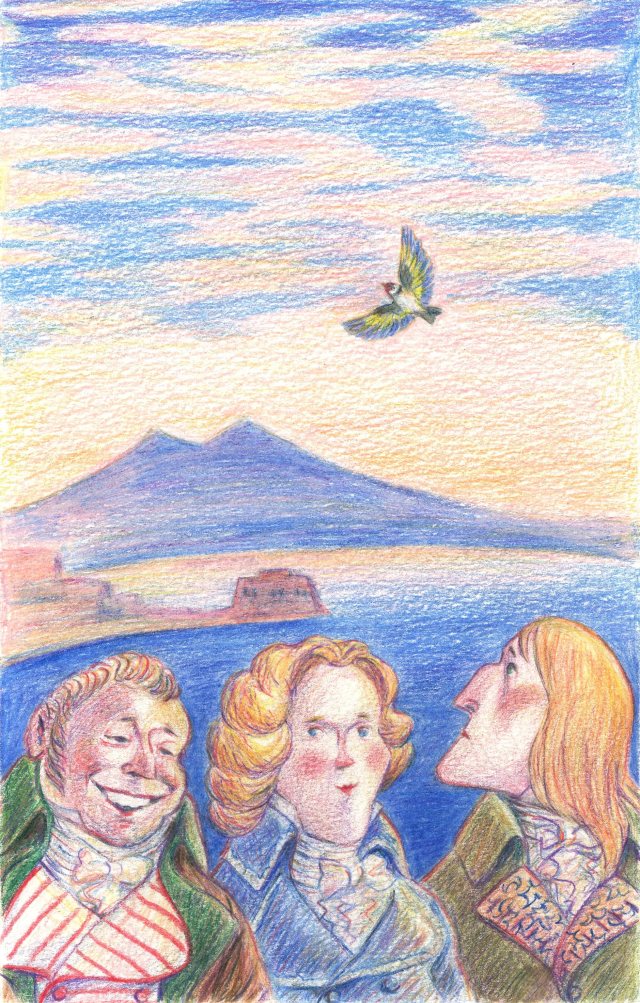 A cover idea for a hypothetical new edition of an Italian novel I just finished reading, Anna Maria Ortese’s 1993 “Il cardillo addolorato” (translated into English as “The Lament of The Linnet.”

Near the end of the eighteenth century, three wealthy young gentlemen from Belgium, the jovial merchant Alphonse Nodier, the beautiful and idealistic sculptor Albert Dupré, and the jaded but ultimately large-hearted aristocrat Prince Ingmar Neville take a pleasure trip down to Naples. Here they meet -and are each in turn besotted by- a wealthy glovemaker’s daughter, Elmina Civile, who appears to be moved by a mysterious determination to reject all possibilities of joy from her life.

Ortese’s storyline is intentionally convoluted, offering ambiguous and endlessly contradictory accounts of events and of the relationships between its various actors. Though I arrived at the end of the novel with only a very confused grasp of what I’d just read, the characters, descriptions, and overall atmosphere of the novel cast an undeniable spell. “Il cardillo addolorato” felt to me a little like stepping into a rococo painting, into one of those gauzy fantasy worlds which, in their knowing insubstantiality, seem to be calling attention to the mysterious void that lies below their surface. As Ortese says of literature and rhetoric in the introductory chapter, “they are golden, chiseled doors, the handiwork of the goldsmiths of dreams. But, once opened, it is only life, dark and cold, that one finds at the foot of the staircase, groaning like water. And you too, my curious Reader, will see, as you follow this story, how behind it there is nothing at all. All you will hear, down there, is a miserable glug-glug.”

Like Loading...
This entry was posted in illustration and tagged anna maria ortese, il cardillo addolorato, neapolitan literature, rococo, the lament of the linnet. Bookmark the permalink.