I consider this one a failure, mainly because of compositional issues. Nonetheless, there are some salvageable elements that could be put to use in a second attempt: 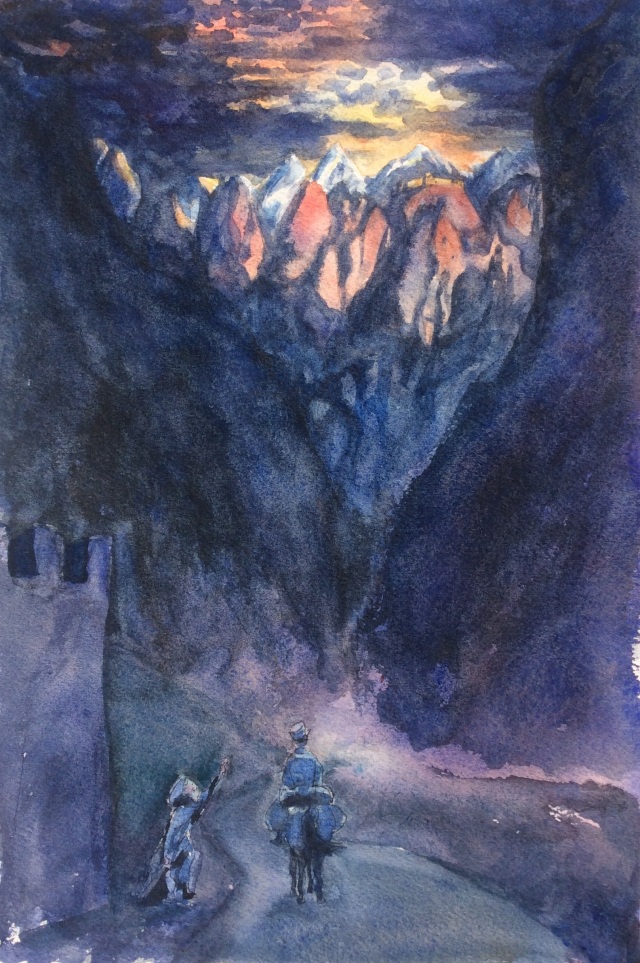 There they go, Giovanni Drogo and his horse, see how small they look against the sides of the mountains, which are growing ever taller and wilder. He keeps on climbing, wanting to reach the Fortress before the close of day. But rising up faster than he can –from far below, where the torrent is roaring– are the shadows. At one point they are at the same level as Drogo, directly across from him on the other side of the gorge. They seem for a moment to have slowed their pace, so as not to discourage the rider, then slide up over the cliffs and boulders, overtaking him.

When the whole valley had already been submerged in a violet darkness, and only the bare grassy peaks at the most incredible heights were still lit by the sun, Drogo suddenly came upon an ancient and abandoned-looking military building, looming darkly and immensely against the clear evening sky. Giovanni could feel his heart beating in his chest, for that was surely the Fortress, yet everything in sight, from the walls to the landscape, carried an inhospitable and sinister air.

He rode all around the structure without locating the entrance. Though it was already dark, there were no lit windows, nor were there any sentry lights visible atop the battlements. Nothing but a bat, fluttering against a white cloud. At last Drogo tried calling out: “Hallo!” he shouted, “Is anyone there?”

Then, from out the accumulated shadows at the foot of the walls, a man appeared, a poor hobo type, with a grey beard and a bag in his hand. In the semi-darkness, though, it was hard to make him out properly. Only the white of his eyes reflected the light. Drogo looked upon him gratefully.

“Who you looking for, sir?”

“I’m looking for the Fortress. Is this it?”

“There’s no fortress here anymore,“ the stranger replied good-naturedly. “It’s all been closed up. It must be ten years since there was anyone.”

“Then where is the Fortress?” asked Drogo, feeling suddenly irritated with the man.

“What Fortress? That one, perhaps?” And as he spoke, the stranger raised his hand to point to something.

Through a narrow opening in the nearby cliffs, which were already cloaked in darkness, behind a chaotic ascension of peaks, at an incalculable distance, still bathed in the red sunset’s glow, Giovanni now saw a bare hill with a regular, geometrical strip running along top it, of a peculiar yellowish colour: The outline of the Fortress.

Oh, how much farther still to go! Who knows how many more hours of travel, and his horse was already exhausted. Drogo stared up in fascination, wondering what one could find desirable about that solitary outpost, almost inaccessible, and so cut off from the world. What secrets did it hide? But it was the final moments. Already the last sunlight was detaching itself from the remote hillside, and up over the yellow bastions surged the livid gusts of the falling night.

-From The Tartar Steppe, by Dino Buzzati (translated from the Italian by yours truly)