Le Poète Public honours me with a poem! 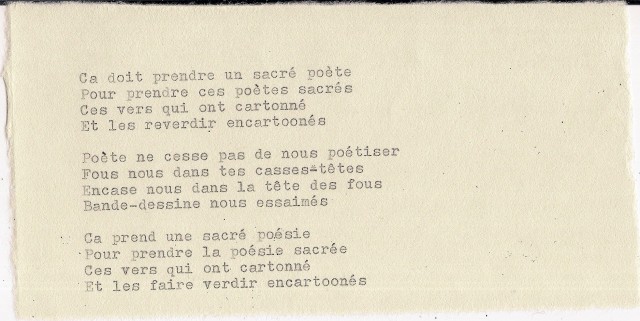 A couple of days ago, one of my Italian students brought me a poem about me by Robert Séguin, Montreal’s very own public poet. Le Poète Public has set up his made-to-order poetry booth on Prince-Arthur Street, just next to Carré St-Louis, where he will compose poems on whatever subject one desires, typing them up on an old-fashioned typewriter. After telling him about my practice of adapting classic poetry into comics, my student came back to the booth fifteen minutes later and voilà, the public poet had produced this very clever bit of word-play.

I google searched the Poète Public and found this image courtesy of Overblog: http://montreal-les-caribous-et-moi.over-blog.com/2016/06/l-enigmatique-poete-de-rue.html 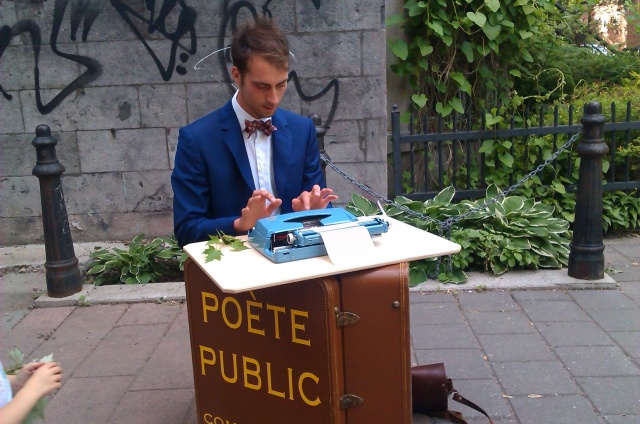 As well as choosing what is quite possibly Montreal’s most picturesque street corner to set up shop, Robert Séguin is clearly the coolest-looking Montrealer since Émile Nelligan (who lived just a few doors down from this very spot, as it happens).

2 Responses to Le Poète Public honours me with a poem!