A few months ago I learned that my entry was among the five finalists in an international competition to create the cover image for an Italian graphic novel recounting the history of the city of Milan from an environmentalist perspective. Although I didn’t end up winning, I was pretty happy with my design proposal for “Medhelan: La favolosa storia di una terra” (Medhelan was the Celtic name for Milan), which is why I’m posting it here, along with the required “motivation statement.” The digital colouring was done by Maryse Daniel, whose fabulous artist website you should definitely check out: http://www.marysedaniel.com/ 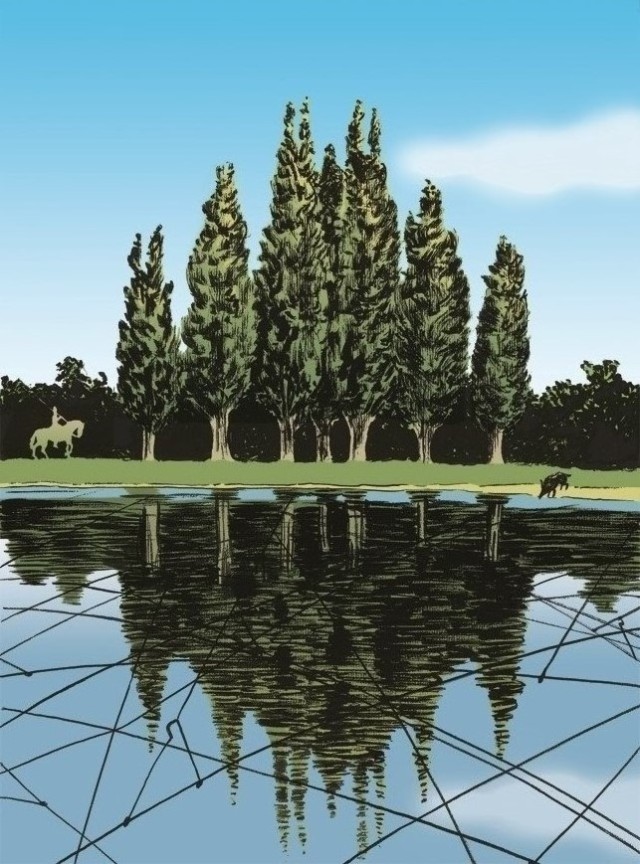 Poplar Duomo – Duomo di Pioppi
Julian Marco Peters
The image represents a row of poplar trees at the edge of a river –a common sight along the banks of the Po River and its tributaries, including the many waterways that once flowed through what is now the metropolitan region of Milan. The rows of poplars are reflected in the water, where they form a reverse image of the façade of the Duomo, Milan’s most iconic structure. Also reflected in the water are the electric wires of the Milan tram system, which crisscross the modern Milanese’s view of the sky from street level.
On the right side of the image, along the riverbank, a wild boar has come to drink. The wild boar was the tribal totem of the Aedui, one of the original Celtic peoples who are said to have founded Milan, and a woolly wild boar sow (the scrofa milanuta) was an early symbol of the city. In this image, the wild boar stands as an embodiment of the primeval wilderness of the Po valley. The approaching rider on the left with a spear resting on his shoulder is a hunter with his sights on the drinking boar. The depicted encounter can therefore be interpreted as a condensed manifestation of mankind’s destructive tendencies regarding nature.
Taken as a whole, this image of the “Poplar Duomo” recalls the forest, sacred to the Celts, on which Milan is built, and the linkages and disconnections between the modern-day city and its natural heritage.