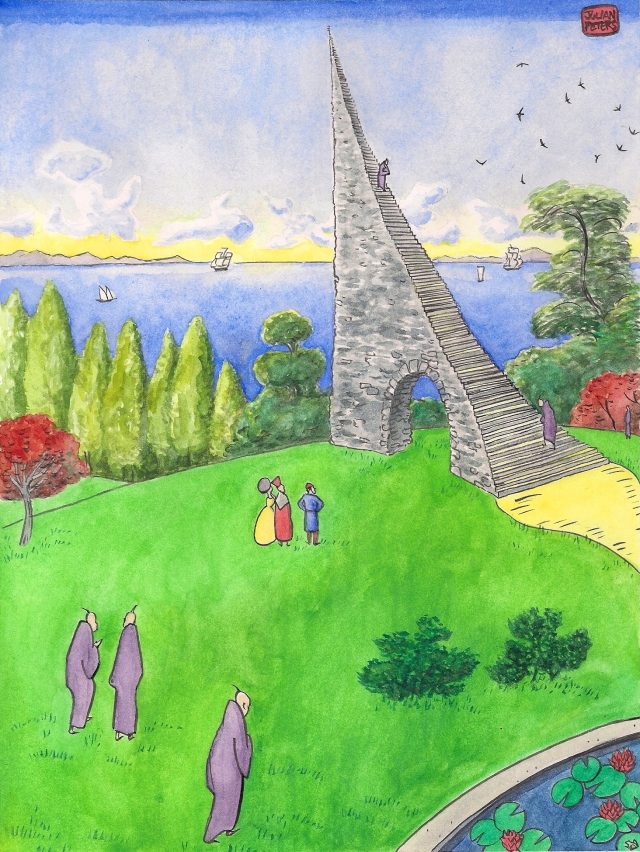 The Stairway to Nowhere at Tanalisca

Sensuka is a city of many religious orders, and contains within its limits an incredible number of sanctuaries, convents, monasteries, and missions. The monastery of Tanalisca is among the most famous of these, owing to the bizarre structure that rises in the middle of its extensive grounds, known colloquially as “the stairway to nowhere.”  This towering stone construction is indeed a staircase, albeit one with the curious peculiarity that the steps, which are quite wide at the base, get progressively narrower as they go up, to the point that the last step, which faces onto a seventy-foot drop, is barely wider than a thumbnail.

The ascension of the stairway is treated as a spiritual exercise by the monks at Tanalisca, who will climb as many steps as their confidence in their own sense of balance -or lack of attachment to their material self-preservation- will allow. As the monks are fond of repeating, the structure should by no means be described as a stairway to nowhere: Its ascension will, at the very least, lead to a better understanding of one’s own limits, or, failing that, to the revelation of what awaits one beyond this vale of illusions.

(click on image to enlarge, and to see the frog, who has never given a single thought to the staircase, even though he lives next door to it)