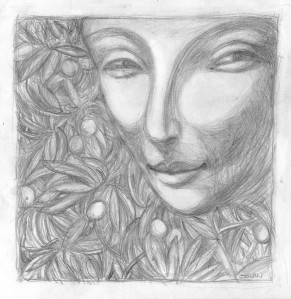 “But the power of the fragment was in the face. It was set in a triumphant smile, a smile that would have been smug if it had not been so full of the purest metaphysical good humour. The eyes were faintly oriental, long, […] also smiling […] Because a star explodes and a thousand worlds like ours die, we know this world is. That is the smile: that what might not be, is.”

Like Loading...
Image | This entry was posted in illustration and tagged archaic smile, John Fowles, The Magus. Bookmark the permalink.