Throughout their siege of Quebec City in the summer of 1759, the British went about systematically raiding and destroying the French settlements both upriver and downriver from the capital of New France. During one such raid on the village of Saint-Joachim on August 23, a detachment of British light infantry, American Rangers and Scottish Highlanders clashed with a group of French-Canadian habitants led by their parish priest, the 52-year-old Abbé Philippe-René Robinau de Portneuf. There are contradictory reports as to what happened next, but it appears that a group of habitants, including Abbé Portneuf, were captured by the British and then murdered and scalped. The number of victims is unclear, but a monument in Saint-Joachim commemorates seven dead, in addition to Portneuf. The monument also provides the ages of four of them: 48, 61, 64 and 69 years. Presumably their younger neighbours had been posted to the defense of the city of Quebec.

This imagining of the events of August 23 are extracted from my ongoing graphic novel project recounting the siege of Quebec City and the Battle of the Plains of Abraham in 1759. Throughout the graphic novel, all the characters from a particular nation are depicted in a combination of a neutral grey tone and one characteristic colour -blue for the French, red for the English, purple for the Haudenosaunee (Iroquois), and so on. 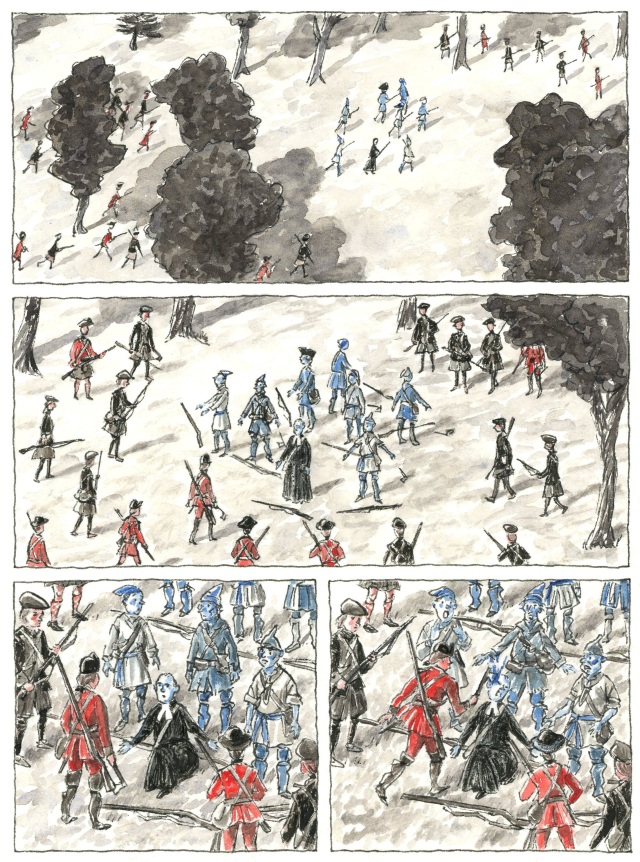 1 Response to Massacre at Saint-Joachim