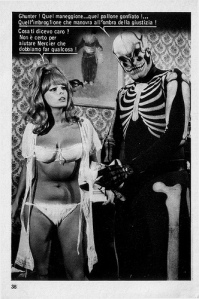 I will be presenting a paper at the conference of the Canadian Society for the Study of Comics, which takes place this weekend in Toronto, May 8 to 10, in collaboration with the Toronto Comics Art Festival.

My presentation, which is based on a portion of my recently-completed master’s thesis, is titled “‘Tiny Forbidden Windows: Italian Erotic Comics of the 1960s and Dino Buzzati’s Poema a fumetti.” My talk will examine the connection between Poema a fumetti, a ground-breaking graphic novel from 1969 written and illustrated by the Italian novelist Dino Buzzati, and the genre that was then emerging in Italy of adult pulp comics. I argue that Buzzati was able to see in comics the possibility of a new, more direct and less baggage-laden means of developing the existential themes that had always been at the heart of his literary production because these mass-produced adult comics had already infused the medium with a certain raw immediacy and an undercurrent of unexpressed impulses and desires.

All CSSC and TCAF events are free and open to the public. Just in case you happen to be in Toronto and are interested in hearing my talk, I will be presenting on Friday, May 9, at 2:30, in the “Rosedale Room” of the Marriott Hotel, at 90 Bloor Street East. I’d love to see you there!